They cut the length of my exile by two months since I had spent 20 days in prisons when I was transferred (this worked out as, one day in prison was equivalent to three days in exile). Back to Khabarovsk, a hotel and the first hurdle in civil life. It was the vacation season and many people in the Far East wanted to fly to the ‘mainland’ for a vacation or to visit their relatives. However, there were no extra flights provided: just one daily direct flight to Leningrad and two to Moscow. Flight tickets were sold out until the fall – no one wanted to lose a week spent on a train. What was I to do? I trusted my gut and went to the Aircraft Division Commander. By my surprise – it was easy see him and he take me in his office right away. An imposing man in aircrew uniform with shoulder straps, similar to a Major General in the military, was sitting at his desk.
“How can I help you?”, the Major General asked politely.

I had to briefly tell him my troubles openly as possible – I hadn’t been at home for six years, so every day spent here was a big loss. To my surprise, the Major General listened to me in a very non-judgmental manner and asked only one question,
“Have you criticized Brezhnev as well?”
“Of course,” I smiled and answered frankly, not knowing whether it was good or bad, “if it wasn’t for him, my manuscript would be lame. I called him ‘genius general’ there.”
The Major General giggled. “Okay, come tomorrow half an hour before the boarding ends, I will put you on this flight.”

He stood up and offered me a goodbye hand. When I left his office, I could not believe that my problem was so easily solved.

The next day I arrived at the airport even earlier. I was carrying only one bag and had nothing to check in. There was a crowd at the check-in counter, waiting for check-in to end reservations to be cancelled. Two places on each such flight were reserved for the regional party committee and the KGB, and people were after these places too. There was even a list of several dozen people in line, which would be moving for the whole month. Standing aside, I watched the hysteria and heightening tensions around the check-in desk. Literally 5 minutes before the end of check-in, the Aircraft Division Commander came up to the desk, waved his hand at me, bent his ear towards the terminal employee, a young woman, and said something to her, pointing in my direction. After that he came up to me to shake my hand and to wish me a safe trip, and then he left. The terminal employee called me to the check-in desk and asked for my document. Then she announced to everyone,
“The flight is oversold.”
The crowd flew off the handle.
“Who is he?! That’s outrageous! We will file a complaint!”
The terminal employee calmly retorted, “You may file a complaint if you wish, I’m following the Aircraft Division Commander’s order.”

She gave me an open-date boarding pass to Leningrad. Lieutenant Colonel Tankman was lucky to get the second ticket. When we were going up towards the plane, the Lieutenant Colonel politely inquired,
“I’m flying on official business, you must be too?”
“Almost,” I decided to make a fool of myself, “I have been doing intelligence work in Japan for four years, I haven’t been home for a long time.”
The Lieutenant Colonel enthusiastically looked at me in surprise.
“I see, they could not have refused you.”

It was a direct 8-hour flight to Leningrad on the IL-62 plane. Time felt as though it stood still, while I wanted to cover the distance faster. We were flying from the East and time was moving together with us. The plane arrived in Leningrad on time, and as soon as we landed, I remembered that autumn day six years ago, when two KGB officers met me on this very field right at the airplane door with the black Volga car waiting at the airstairs. There was no one meeting me this time as I didn’t have time to inform my parents and Irina. That was it: I was back at home. I had an unexpected twist in my life, so now it was time to catch up. When I walked out of the terminal, I could take a taxi and go straight home, but I decided to take my time and went to that part of Pulkovo, where the Intourist hotel was where I had been earlier. You could pay there both in RUB (and I had quite a lot of Russian bank notes) and USD. There were several people in the cafe and the bar speaking several different languages. I ordered a cup of coffee and joined an English-speaking couple at a nearby table. I understood practically everything they said. They talked about the country’s new politics and Gorbachev. For some reason, I felt that I would be in their shoes soon, drinking coffee with brandy before flying away. After my respite, I left the airport, took a taxi and walked into my house on the Petrograd side half an hour later.

My parents were waiting for me, but did not know when exactly I would come home, so my unexpected arrival came as a joyful surprise. We celebrated my return and talked over the key challenge I was faced with: namely, what I should I do next? There could be little doubt that I would be able to live and work in Leningrad, therefore I had to leave. When my parents showed me a huge bunch of letters received from Western Europe, I was surprised because I did not receive a single letter from the West when I was in Ayan. The last time I called home before leaving Ayan, a postal worker secretly told me,
“I believe you received over two hundred letters from the West, but we gave them all to the KGB department.”

The next day I went to my wife. She was living in her apartment with her mother, who went down to the country for the whole summer. We also discussed what to do next. First, I needed to get a passport; second, I wanted to visit all my new friends I served my term in the labor camp with (they lived in Moscow, Tallinn, Riga, Vilnius, Kiev, Lviv, Tbilisi); third, I wanted to prepare something for the International Book Fair in Moscow scheduled for early September. I would not manage to write a book prior to the fair or restore the manuscript confiscated 6 years ago from the top of my head. A week later I had a talk with Police General, Head of Leningrad Main Internal Affairs Directorate. He shook his head and informed me,
“We cannot register you with either your parents or your wife, which means you cannot work in Leningrad either. By law, you may not live closer than 100 km to Leningrad. You have not been rehabilitated, which means that your criminal record isn’t clean. You can contact you-know-what, I believe they will not turn you down.”
“What if I don’t?” I knew what he was implying and I had no desire to go to the KGB Directorate that had locked me up against the law in a labor camp and exile for 6 years.
“I don’t know,” the General clearly did not want to talk about this, “leave.”
“Where?”
“Wherever you choose!” the General said gruffly.
“Meaning?”
“You have several invitations from Western Europe,” the General explained.
“But I did not see them!” I retorted, puzzled.
“And you don’t need to,” the General was getting nervous, “fill out a departure application and we will process it in no time.”

I was on the road throughout summer. At the beginning of September, much like I did like 6 years ago, I took the Red Arrow train, but now a sleeper, to get to Moscow and visit the book fair. I hoped to see those publishers whom I had met 6 years ago. My compartment companion was an imposing fellow, but I was not in the mood to talk with him, so I went to bed right away. I think he was a regular business traveler, not a security officer this time. At the book fair, I was lucky to find Alexander Hoffman, Vice President at Doubleday, one of America’s largest publishers. Hoffman recognized me and was very surprised at my story about what had happened 6 years ago and the consequences. Without hesitation, he invited me to a meeting between American publishers and Soviet writers at the Prague restaurant on Arbat same day. We exchanged addresses and agreed that if I emigrated to the United States, I would come to visit him. Autumn was a never-ending meeting with various diplomats and journalists. They granted me an exit Israeli visa, however, my destination was not Tel Aviv, but London where I was invited by the Amnesty International. At the British Embassy, they put an entry visa on my passport issued to politically unreliable persons, so I had only to arrange my thoughts, pack my things and arrange my arrival with friends in England. Everything was finally settled and a plane ticket for March 19, 1988 to London was lying on my table. Irina decided to stay with her mother, but this did not change anything and I was allowed to leave the country without divorcing her. 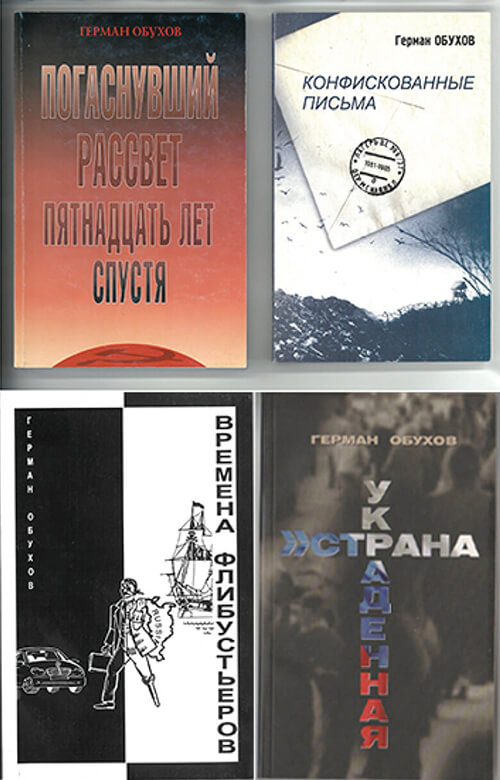